In the grand tidy up and catch up I finally got round to flocking the bases of my last squad of Germans, leaders and support options. So here are the obligatory washed out pictures. New phone does not mean better pictures, lets call it user error. 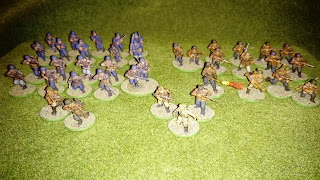 The big picture, 3 squads of 10 men, including a Junior leader and an LMG team. 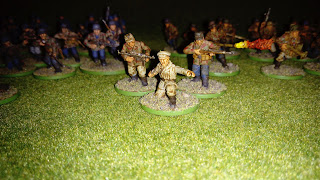 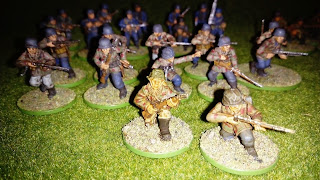 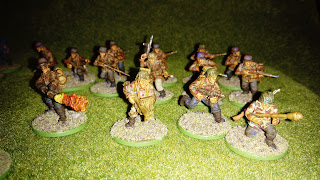 I'm not sure I need much more for these, tentatively of the Luftwaffe, with a squad of Fallschirmjager (sp?) and the rest standard troops, I could perhaps do with getting another 3 LMG's and an MMG, so as able to field different periods but probably not necessary yet.

Next I'm sorting through my dark ages stuff, to see what else I need to make up units/groups for Dux Brit and Saga Forces as I'm sure I was a group/part of a group short for 2 Dux forces.
Posted by Genom at 14:49 No comments:

Well it's been a while and in amongst the tidying up of other projects, I finally managed to finish the last group for my Napoleonic British, so I've now got both sets ready to play. (Yay) Just need to do another couple of Deployment/objective markers and perhaps investigate some support options, but that's how it goes. 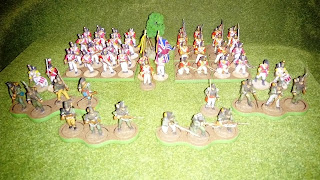 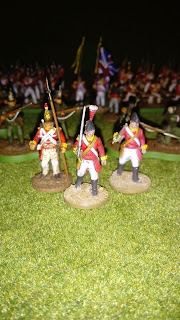 2 Officers and an NCO for the infantry groups, there are 2 drummers as well. 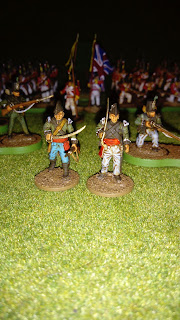 2 Rifle Officers, one with his rifle in hand, heavy sabre and his blue french cavalry trousers. 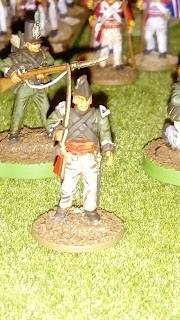 And an almost passable close up.
Posted by Genom at 15:42 2 comments:

Well it's finally done, I've finished off a Napoleonic force! I really detested painting these figures, I think it's just the level of detail on the uniforms that annoyed me and as a result it took so long to do. (Although it's actually just under a year as I picked the first of these up at Claymore last year, we just won't mention the British that have been languishing for far longer) They require a level of crispness that I'm just not used to painting anymore, recent armies have all been, dark ages, ww2 etc. Anyway here's the usual badly focused/lit pictures. 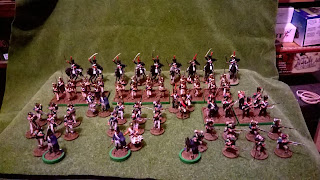 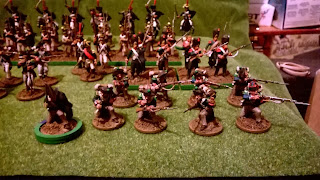 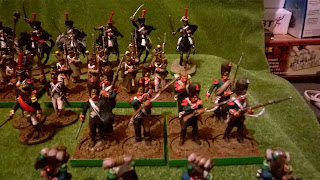 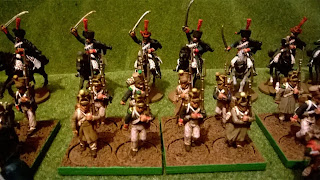 I'm going to paint a few random things next, last squad for my CoC germans, finish off the last Amazon bases, Tuetonic leader for Saga Crescent and the Cross.  Then I think I'll need a concerted effort to try and get the British done to match this lot.
Posted by Genom at 14:34 1 comment:

Hordes of the Things

Played a few games of this now using my 15 mm armies and we still haven't managed to get a win with the undead force. Oh well! But having hunted through the collection, I now have the Undead and Arabian Myth force seen earlier in the blog, but also, Dwarves, Medieval and Romans all painted (with a couple of bases in the dwarf force as an exception) I also have based, but not fully painted Celt and Greeks forces.

Anyway, Dave was talking about doing some Mythical Greece, so I dug out my old Grenadier Amazons and did some tidying up to fit them onto 60mm frontage bases. So here they are all finished. I have 28 points there to choose from so far with a further 4 points lurking. 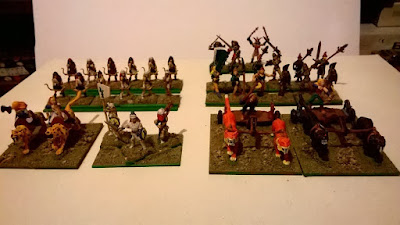 1 Hero, 2 Knights (Chariots), 1 Beasts or Riders, 4 archers, 2 blades, 3 spear, with another spear on the painting table to make it up to 4.  I'm sure I have another 2 cats, but only 1 rider, (I used the other one on a Unicorn decades ago) which will give me a second Beasts/Riders which I'd prefer as from experience so far I'm not keen on having a single element type present in the army.
Posted by Genom at 14:35 3 comments:

We played our first game of this last Monday, using my Wolfpack from the Giles Kristian books Raven Blood Eye, Sons of Thunder and Odin's Wolves. David had his own vikings and I'd made up a third Sidhe warband at the last minute which Jim used on the night.  We went for a very simple scenario to test things, Davids vikings were in a village trying to sacrifice some christian priests on the old Oak tree, I was supposed to be trying to save them and the Sidhe were annoyed that a sacred oak was going to get soaked with christian blood.

The game went okay, the feel of it is very different to In Her Majesties Name and Daisho but it seems to work. Even with the extra abilities that the Sidhe had it didn't feel out of place.

Anyways, my pictures were a bit crap because I kept forgetting to take them. but here they are anyway and also here's my copy of the Blood Eagle - calculator  I've made up for making warbands. 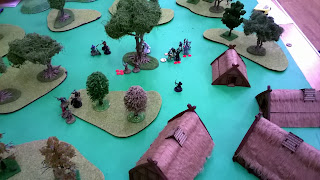 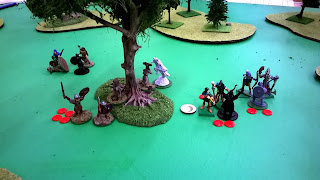 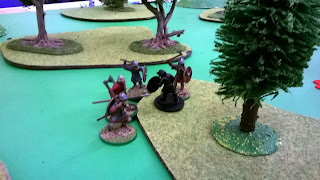 I like the idea of doing the blog to keep track of what I've been painting, but it just doesn't happen that I remember to take pictures as and when I complete stuff, so over the last few months I've been working on the following.

So first up we have the 10mm Finnish I got from Pendraken at the Leeds show. Based specifically so we can try them with Chain of Command to see if it will work in the smaller scale, these ones are finished, the rest have been based up and will be used with these ones for BKC.  Russians will be bought at Carronade and the same will be done with them.

Next up, there was a small resurrection of DBA at the club, and seeing as RiC and myself have been talking about it for a while, I finally got round to finishing off my 15mm Hordes of Things armies, I have Arabs and Undead, most of whom were already painted but needed tidying up and rebasing onto proper bases, all new MDF bases with magnetic strips on the bottom so they'll stick to a biscuit tin. I have a bunch of Dwarves, Medieval Humans, and Celts that need worked on and I have some Romans already.

This next set are the 28mm WW2 Germans, I got one squad for christmas, the rest I picked up second hand from ebay, 2 squads finished, 1 more to go and then buy some support options for playing Chain of Command. 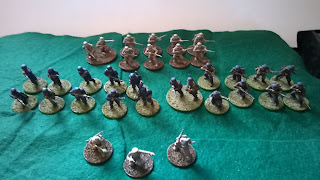 Lastly for this update my Skaven warband for the next Mordheim campaign at the club, painted up differently to Fi's Skavan so I can claim these ones. 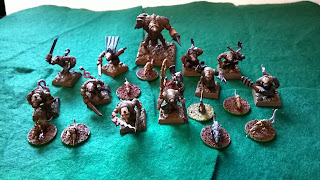 More to come at some point, I bought Blood Eagle when it came out and I'll no doubt get a few more Vikings for it, as well as playing with some of the more mythical warbands from it will likely see some of my Elves getting a tidy up as Sidhe and some dwarves as well.

Likewise on the new rules front Sharp Practice 2 is finally on the horizon and preordered so that means a concerted push to get my forces painted up for it. I keep hoping that I'll be able to pick up some prepainted Napoleonics at the Carronade flea market really cheaply, but I doubt that's going to happen as I really hate painting formal uniforms.

Well as always it's been ages since I posted anything, the hassle of trying to take pictures is the main bit that has prevented me from doing more regular updates.

Since the last update I've done a bundle of more things. I finished off those Orcs for use in Frostgrave and I've got enough others from the likes of Mordheim and the rest of an extensive fantasy collection to do me many more warbands.

My Clan patrol for Diasho has been finished off and I'll get round to doing my other Buntai sometime this year.

Got some 10mm Finns from the visit to Leeds and in trying an experiment I've based up and painted enough to try and use in Chain of Command with each base being a team.  I'll pick up some Russians at Carronade and once they're done we'll see how it works out in that scale.

My Brother in law has picked up a copy of the 7TV rules and a bundle of Dr Who figures from (Black tree?) So I've been painting them up, 3 Doctors and 5 companions done so far as well as the Ghostbusters for him from Crooked dice.  Another friend (Who doesn't wargame had spotted 7TV at Leeds and said, "There's a wargame I could get into." So we have and I painted her up the SHIVA set for her christmas.

My other stuff includes painting/tidying up 2 Epic armies, space wolves which was mostly tidying and unifying the schemes  to finish it off. The other was a Chaos force, mostly from scratch so that now gives me 3 fully done Epic forces to use.

My Napoleonics for Sharp Practice continues to be a slow burner, with 2 British units finished and 1 French Unit half way there.

I've also been doing some small modelling projects, including a scratchbuilt Sentry box and trying something out with how to texture a building. I have a load of foamcore which I had made a church with ages ago, but never got round to finishing because I couldn't make up my mind how to do the brick work until an experiment paid off. Hobby craft do A4 Sheets of foam, so I made a small ruined corner of a building and covered it with the foam, and then once everything was dry I etched into it with an old stylus to create the bricks. I like the end result so sometime this year that church will actually get finished.

Looking forward to this year,
Finish that Buntai,
Get the 10mm Russians and get them done for CoC as well. The balance of the models for these forces will just be based up without a dice marker for BKC.
Make 10mm Trenches, gun emplacements etc for our little campaign.
28mm Germans, I got a squad for christmas from the inlaws, so I'll get them done and probably pick up enough to finish off a platoon for CoC.
Continue with Napoleonics.
Blood Eagle comes out and I want to pick up a few more personality type vikings as most of mine so far are from the Gripping Beast Plastic boxes so having a couple of extra stand out models would be good.
I'd still like to get more Victorian period models for use in IHMN but we'll see how that goes, it's not a priority.