I've been fairly busy recently with other stuff so painting time has been limited, and most of it has been spent prepping a new project and making a small building.

But I have managed to get the following done for my Iraq/Egyptians. Some MRLS systems, BM21 and B27, AntiAir in the form of two SA-8 Geckos and 3 transporters with turretless tanks which I'll use for convoy scenarios and/or objectives. 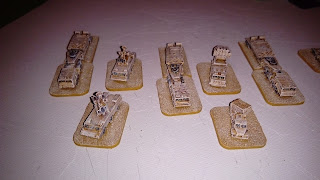 Still need to get infantry and a couple of new vehicles for command stands as well as the right sized bases, but otherwise they're pretty much done so it's on to opposing forces in the form of IDF and Americans where I have the infantry but not the vehicles.

Posted by Genom at 23:18 No comments: Links to this post