Another lot of wonderful miniatures from the last Kickstarter. 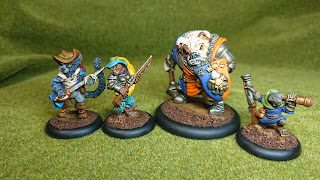 Another 2-3 batches about this size should finish off what I currently have, they are rather addictive to be fair, the models are seriously good.

So rather than getting birthday money and heading to Claymore as has been the norm for a while now, it was spend it on online orders instead, and this little group arrived and finally got finished a month and a bit later. 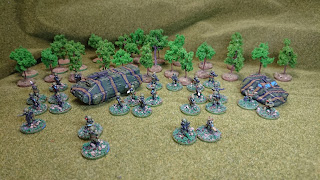 Brigades 15mm Polish infantry Platoon and an Indonesian APC as well as a small hover truck. 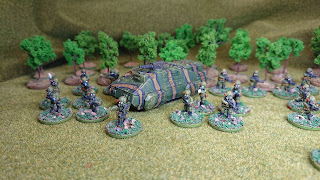 They'll be used for Ambush Alley/Tomorrows War engagements up against the Ikwen insurgents. 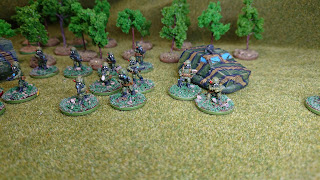 Next up will be some more Burrows and Badgers miniatures as I work through the remainder of the last Kickstarter. (Another 2-3 batches to go I think) But the painting table has the last of the cultists from Midlam on it, (casualties, Throne and beasties) as well as a chunk of Aztec styled scenery.

Court of the Mummy Lord

Another of the Midlam Kickstarters, these Egyptians of the Royal court will be used in In Her Majesties Name and the like. 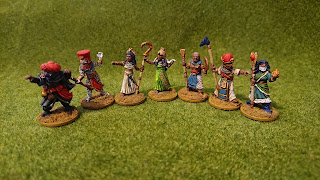 I've got quite the collection now of civilian type characters alongside the witches and townsfolk (later still to be painted) That can still be used as adventurers as well. I really need to get that campaign written up for Thud and Blunder.
Posted by Genom at 08:00 No comments:

In an effort to try and find a use for some of my other epic miniatures I decided to expand my 6mm Sci-fi force to make it up into an Inquisition force. 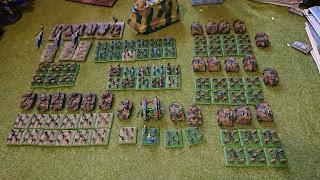 A lot of them are proxy obviously, so the marines on the right are Sisters of Battle, the Beastmen are redemptionist crusade, the Imperial Guard are actually Imperial Guard but with some Bradley Miniatures (through Alternative Armies) APC's instead of Chimera's and some really old Copeland Models in as Valkyries and Exorcists etc. There's also finally a use for my old Capitol Imperialis.
There are two lists in the version of Epic we use, Developmental and Experimental. I'm not using any of the outlandish stuff, most of it's the basic options that exist elsewhere in approved lists so should be fine on the table.
Posted by Genom at 01:00 No comments:

From Hasslefree Miniatures, the post apocalypse Scooby Gang. I got these at the same time as the Bloodbowl player and handful of others. 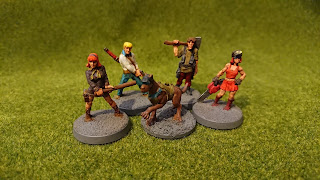 I will eventually use them for the likes of Rogue Stars or some kind of cultist bashing (I've got enough of them).
Posted by Genom at 00:30 2 comments:

So Midlam miniatures are responsible for a lot of my Kickstarter purchases, eventually for Thud and Blunder and In Her Majesties Name. The Cult of the Kracken Lord miniatures are great for some Cthulhu style evil goodness. 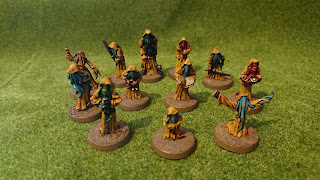 This is actually about a third of the set, the next batch are on the table with StoatBarts at the moment and as you can see are painted in the same colouring as all of the other cultists.
Posted by Genom at 08:00 No comments:

So while I've still got a bunch of posts scheduled to pop up with the other stuff I done during my time away from the blog, The first batch of models off the table since. 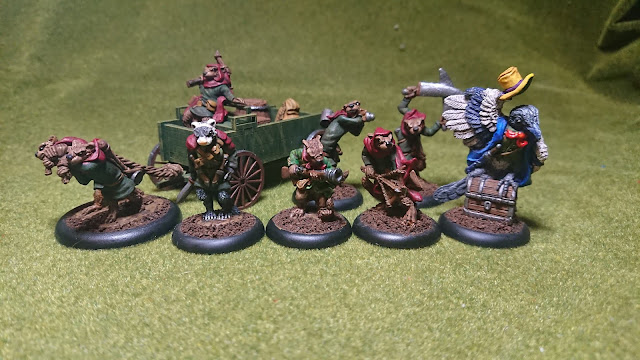 'Fast' Eddie Stoatbart and his hauliers. More Burrows and Badgers miniatures, the stoats come in 'mounted' and 'dismounted' versions, alongside the stoat with a blunderbuss, weasel rogue for some of that sneakier action and a certain Independent Trader for handling goods at either end of the journey.