As promised some time ago, here are some bad pics of my British Para's for Chain of Command. It's missing the support options, they are mostly painted and ready but need based as I discovered the bases they came with are entirely useless and don't fit. Especially the 6pdr, the base is far too small. 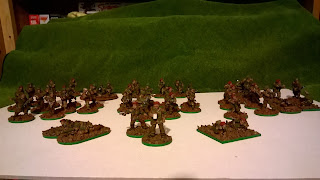 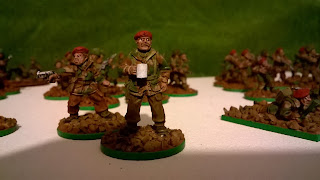 The man in charge, undisturbed with his mug of tea in hand. 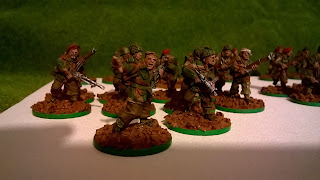 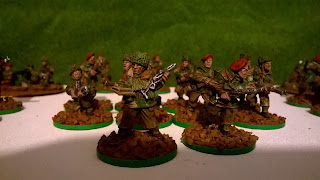 And finally a little bit of something to cheer the troops up. Jodie from Colonel Bills.
Posted by Genom at 16:05 No comments: Links to this post

It's been quite busy with lots of little bits and pieces on the painting table recently.  Mostly involving a lot of glue.  I went through and assembled the Napoleonic French I got at the Claymore Bring and Buy. It had enough for 4-5 units for Sharp Practice so I've been back and started painting the 2nd unit of British, first unit below and will need to put some of the rest together at some point. 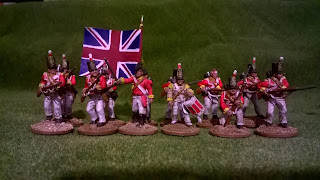 I also assembled a Skaven warband, which I plan to use for the next Mordheim campaign 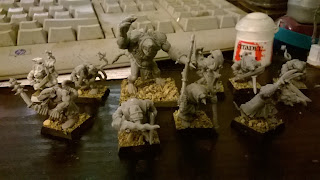 Clan Patrol Buntai for Daisho is next, I'm doing some touch ups on these to unify the colours as they were a right mix of models that I got from Dave. 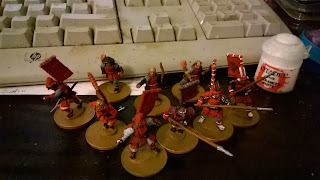 Lastly on the assembly front, some Treasure Markers for Frostgrave 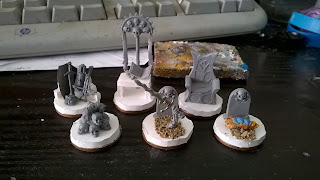 Finally for this post I'm playing Epic with Kev on Monday so I had to go through my Marines to  make sure I had enough to make the 3000pt list. Here's my space wolves and some miscellaneous other bits and bobs I have used before. These were originally from Space Marine, so the companies were very different than they are now. 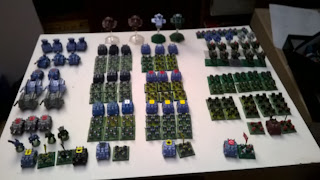 and the spares box, rather a lot of marines still in there, some of them even have chapter markings painted on, Whitescars and some Dark Angels. 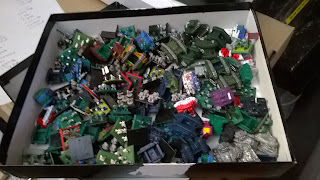 I still have a shed load of Imperial guard and chaos infantry sitting in boxes as well. I used to have a regiment of about 25 Imperial Guard companies under the Space Marine rules. I'll need to check through that lot soon as well.

It's been a while since I last posted up on here. I have been busy with stuff, but mostly all small bits and pieces of projects.

Frostgrave seems to have piqued everyone's interest so I dug out all my unused wizards from my collection and set about pairing them off and painting them up.  Orc Warband at the bottom as well. 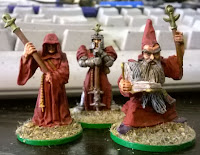 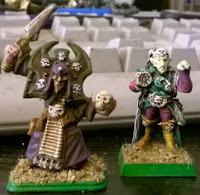 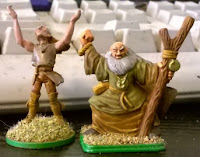 I've been working on my little 10mm Fort, just needs a gate made, drybrushing to make the woodwork not so flat and flock the ditch area. 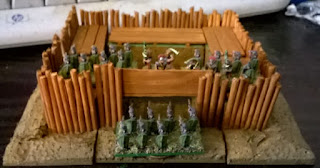 I've also managed to complete my ww2 stuff, (Pictures to come of the British Airborne) But here's a test one of my Foundry Home Guard. 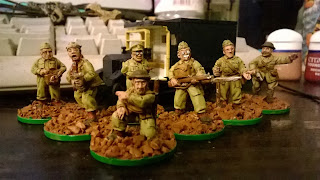 I've also finally sorted through my 6mm Moderns and based up my Modern Soviets.

Not sure if I'm going to keep them or put them into the bring and buy at Claymore. I may have to get through more of my extended stash before I do that. However I also have these and I have no idea what they are.


Lastly, it's been Malifaux, got my hands on 2 crews, Rasputina and The Kin. They're all assembled but need to wait and see how the painting goes.
Posted by Genom at 13:17 No comments: Links to this post

Email ThisBlogThis!Share to TwitterShare to FacebookShare to Pinterest
Labels: plan

The year past and looking Forward.

So that's another year. (And 6 months or so since my last post)

Updates have been good this year with a lot of targets made.

I've finished off my 10mm Germans for BKC. (Actually all painted and based)
My 10mm Arabs are done.
10mm Crusaders done to 1200 pts
10mm Undead, High Elves, Mongols based and mostly done. (alongside some Romans)

I rebased my 15mm Seven Year War French in Canada in line with Maurice. Hopefully I'll pick up the remainder at Vapnartak.

28mm Tuetonics finished and based for Impetus.
28mm Viking/Dark Ages enough finished and based for 2 Dux B forces.
Purchased and painted up a bunch of supplementary stuff, livestock, carts, Monks etc
Painted up some Valhallans for the Steampunk game In Her Majesties Name.
Touched up and rebased a bundle of Amazons (About 40 Old Grenadier models so far) for IHMN in the Congo.
Rebased and touched up most of my old 25mm RPG figures. (about 20 figs)
Painted my Dork Tower Miniatures.
Painted a set of Talisman Miniatures for a friend.
Painted a group of Napoleonic British (Thanks Kev)

Lastly model wise I glued together my Terrablocks I got for Christmas. These are a 3d dungeon type landscape models from Sally 4th, pics soon, but one of the reasons I wanted to get some of my old RPG figs touched up and rebased. I guess my monsters will need to be done soon as well.

Looking forward, I'm not sure I'll be making a huge amount of model purchases this year, I need to start concentrating on storage :( so that I can get everything tidied up properly. This also means that I want to get some of the old stuff sorted out properly in time for the Bring and Buy at Claymore unless anyone wants to sell it for me at Carronade. (Time to be ruthless if I can muster the courage)

So most of my painting this year will be concentrated on finishing off armies and warbands that I already own.10mm a must finish for this year.

Biggest challenge coming up is going to be keeping the Dux B Campaign going smoothly as we're still not sure how it's going to pan out past the 1st round.

Also I need to sort out some rules for doing some Scifi skirmish gaming for a Star Trek style Computer Game we've started playing, some non Tabletop gamers in the group so I'm thinking I may stick to Spacehulk rules and see how it goes, my other main option I think would be the Dr Who miniatures game rules which would work quite well as well.