Well here's some bad pics of where I'm starting out with my Tuetonics. 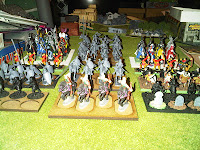 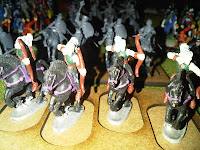 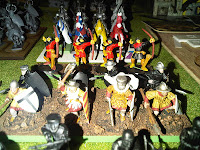 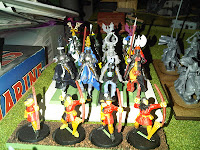 Mounted Sergeants (Turcopoles) and the Teutonic Knights (as is) are the other ones from Fireforge with several still to be made up. However I really need to get my hands on 2 skirmish bases of Livonian Javelins t omake the force I want to try and field, then see how it all works out.
Posted by Genom at 12:48 2 comments: Links to this post

Next up Vikings and Tuetonics

Well now that I'm back from my little trip away for one of my other hobbies (IVFDF) it's time to get ready for the Viking exhibition on Sunday (After the Scotland vs Wales game on Saturday) I have my how to paint a model in stages done. Just got a few little bits to finish to round that off so that I have some proper finished off models to display as well. Then it's buckets of dice, Vikings and Scots.

Pics to come for both.

Next up is my Tuetonics, I play Impetus already though generally with Dax's models. I got my teutonics mostly assembled now and the undercoating has started, there is a tournament at the club in April which is my goal to get everything ready for. Though I may need to borrow some skirmishers as I don't have anything suitable in my own colelction for them yet. I'm slotting in my Bretonians on some makeshift sabots to make do for nobles and German mercenaries, and they don't look too out of place thankfully.

Some make shift Pavises will also need to be made probably, but I have some old Tombking shields I can stick on a base for now.

Agian pics will come once I have things a little bit better organised.
Posted by Genom at 00:41 No comments: Links to this post