We're doing a big game of Rogue Stars at club tomorrow (well lots of 1v1's) to learn the rules and now that my PC is working again, here's the 2 crews that I've put together for Ric and myself to use. 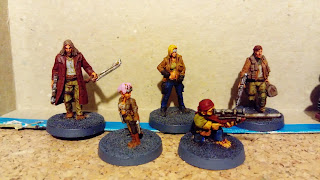 So I managed to completely skip thier Scifi range when I got these because the scifi ones I wanted were all out of stock. So maybe another time. 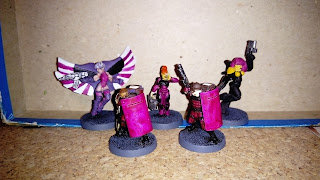 I've got a few other groups I could use for this, More Vasa infantry that could easily be a Militia, Escher gangers that could be Pirates, Squats that would be Miners, Necrons to be robots, and Orks that could be aliens alongside my Krogan and genestealers or something.

But we'll see how the game goes first.  Because it's so trait driven it seems like it'll be really hard to remember what everything does, despite the mechanics being fairly simple so I expect it'll take a few games to bed things in and tweak traits as I've probably picked stuff that won't work with the models or something.